I was eager to gain from the momentum of my 2015 watercolor classes, so this year I planned to  dedicate to study and experiment (along with many hours spent studying Czech for our planned trip in April/May), rather than an emphasis on entering shows and selling. A torn rotator cuff was a complication I hadn’t expected, so slow and steady was my goal. I was also eager to make more use of my brand new printing press, so  I took a short course in Printmaking at School 33.  Two of the results: 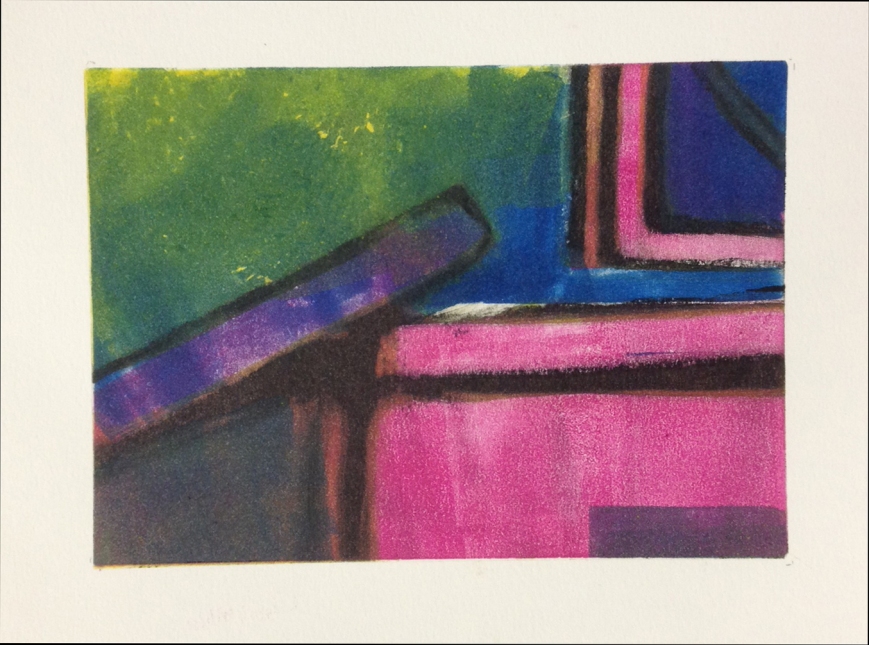 April came and we headed off to the Czech Republic, only to return after a week when my mother-in-law became ill and subsequently died.  Another hard time which caused a gap in painting.  This time, though, I dived right back in with a still life class, and despite the rotator cuff issue, I painted obsessively through June and July.  The class required using acrylic, not at all my favorite medium, but I was happily surprised by the results: 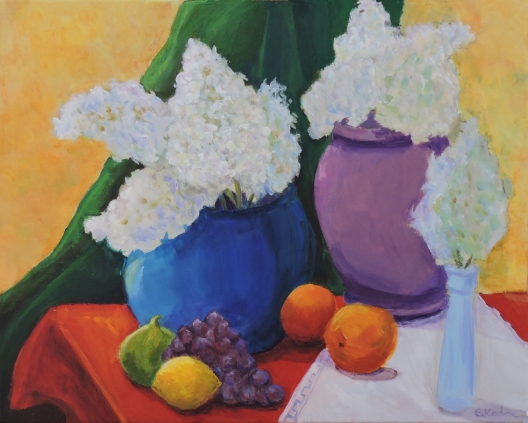 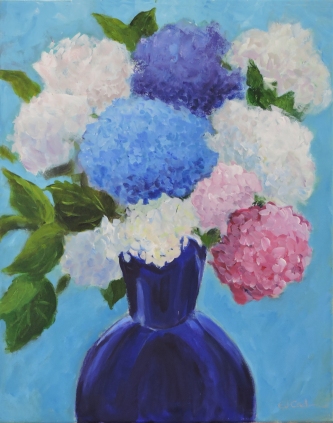 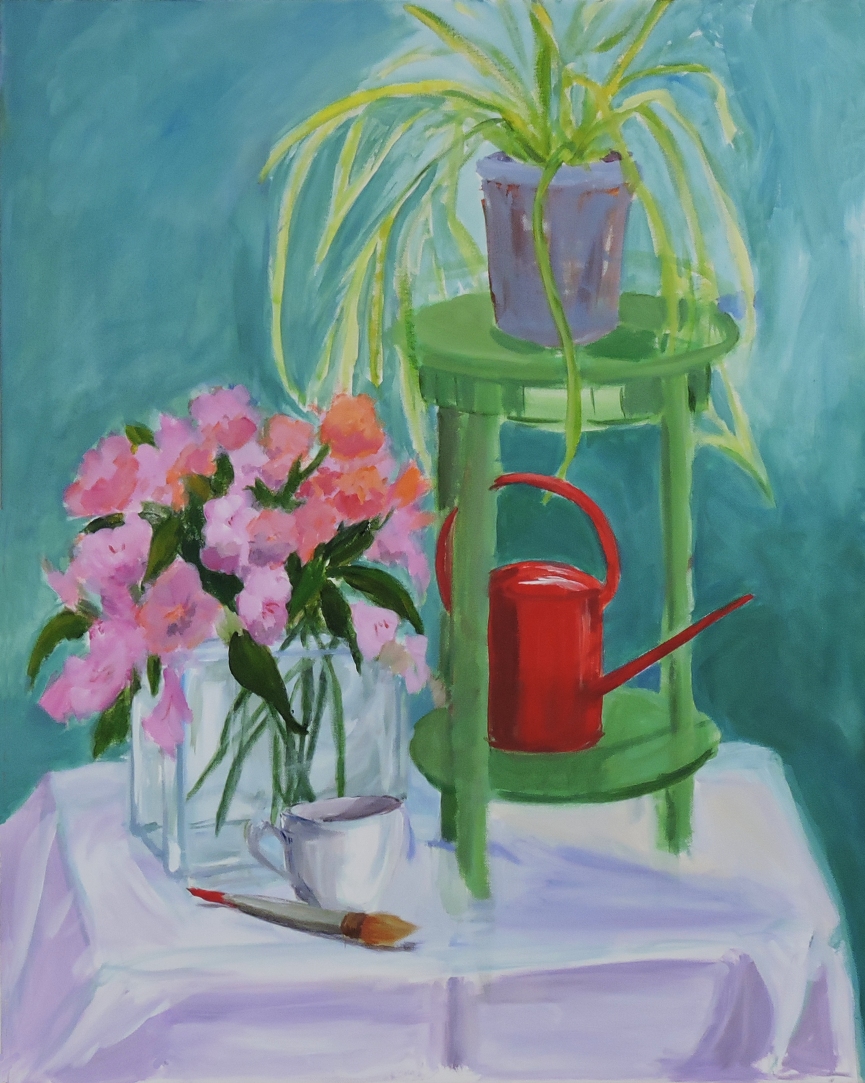 These came out okay, right? So what’s the problem with acrylic paint?  It just feels “wrong” (I’m an oil painter, after all); it dries incredibly fast, even becoming tacky in the midst of applying the paint; and it is a major pain to clean up!  I’ve heard so many people say they use acrylic because the clean up is easy. Don’t believe it.

I haven’t abandoned oil of course.  Here are my most recent two.

Looking over Vineyards, Croatia.  We had a marvelous time last year in Croatia, and this view in the morning, just after rain, had a lovely, hazy atmosphere. I made a few pencil sketches while there in addition to a photo. 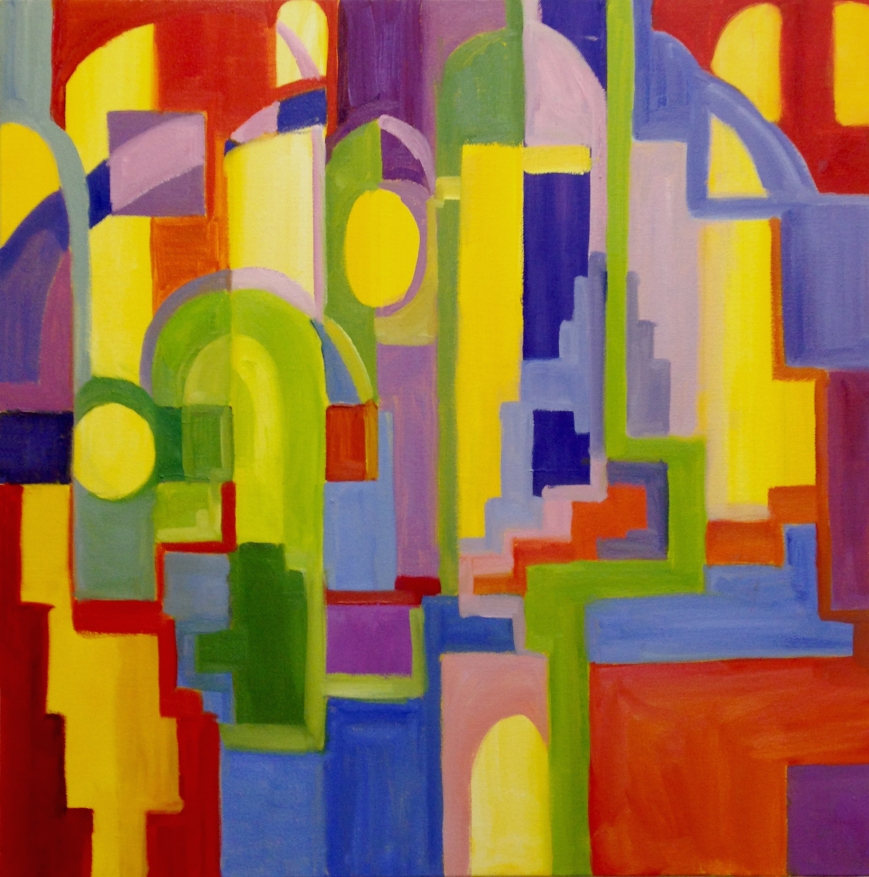 In a dream I saw a city invincible.

This painting was in fact inspired by a dream I had last year. I awoke with the dream still in my mind; a dream of a large, square painting, yellow ground and dark purple stripes of varying lengths.  I quickly made a sketch, and then bought square canvas, plenty of yellow paint, and began working.

Somehow the idea just didn’t work. I painted, and considered, and painted and considered, for many months, adding an orange square, changing the stripes subtly, until one day, all at once, the vision came together for me and I saw the whole painting I wanted.  The Whitman poem, a favorite, seemed to fit so well what I wanted to express that I used part of it as the painting title.

I Dreamed In A Dream  Walt Whitman

I DREAM’D in a dream, I saw a city invincible to the
attacks of the whole of the rest of the earth;
I dream’d that was the new City of Friends;
Nothing was greater there than the quality of robust
love—it led the rest;
It was seen every hour in the actions of the men of
that city,
And in all their looks and words.

I’m working on these,

Study for Morning in the Paddock 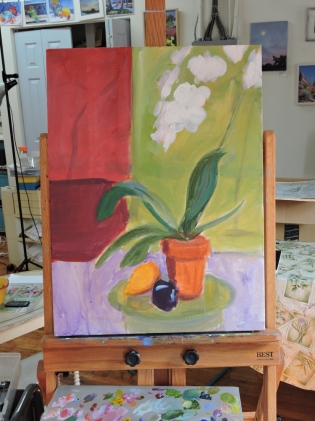 and I have numerous other paintings to complete,  a lot of study and experimenting, more oil, watercolor, and even acrylic paintings, some printmaking, and possibly even more blog posts!

I never thought, when my Mother fell and broke her hip nearly two years ago, that I would have to take such a long break from working.  One of my friends recently lamented having fallen off my blog email list, since she no longer received notifications of new work. This spurred me to get off my duff, but of course the longer the lapse, the harder to come back.  Inertia, borne of lack of practice, fear, and apathy, seems to take over.

To regain the habit of working, I find it helpful to take classes or workshops. In spring 2015 I ventured north for Watercolor Monotypes at the Pennsylvania Academy of Fine Arts in Philadelphia, then spent a week in July at my favorite summer workshop location, Wildacres on the Blue Ridge in North Carolina, where the Ringling School of Art and Design holds week-long programs.  The class in Watercolor with Dwight Rose was wonderful and sparked my interest in the medium again, so I followed up with a watercolor class in the fall. 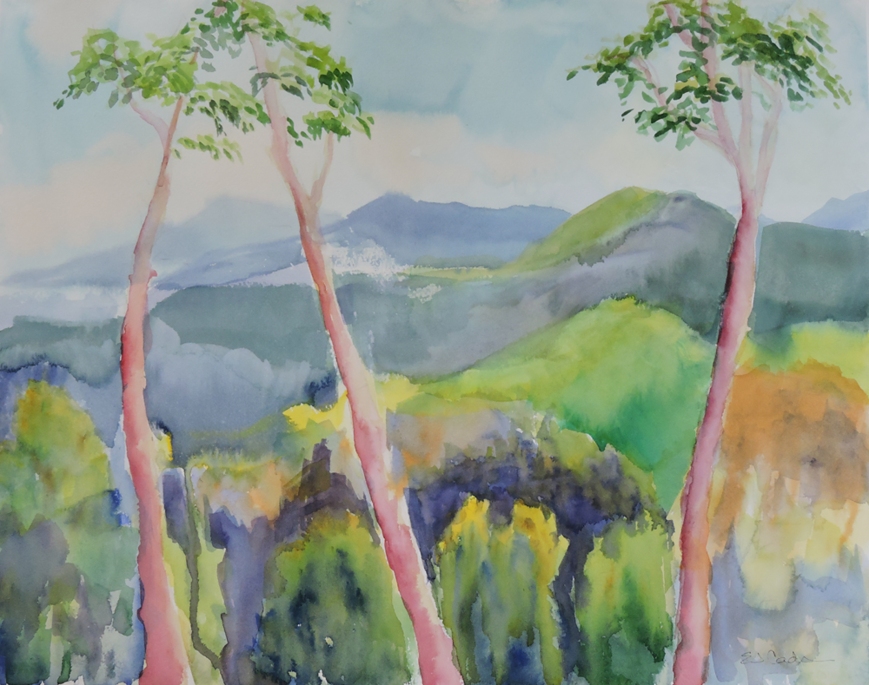 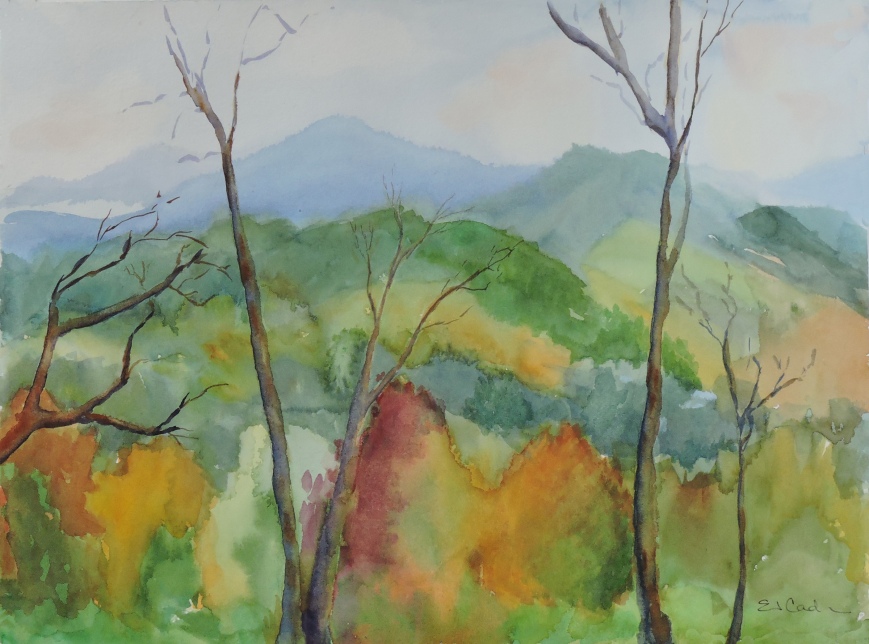 I painted these two watercolors looking over the Blue Ridge mountains.  I used an easel instead of keeping the paper relatively flat, so there are some nice drippy areas in the trees. Top: Reach for the Sky, Lower: Bare Ruined Choirs. 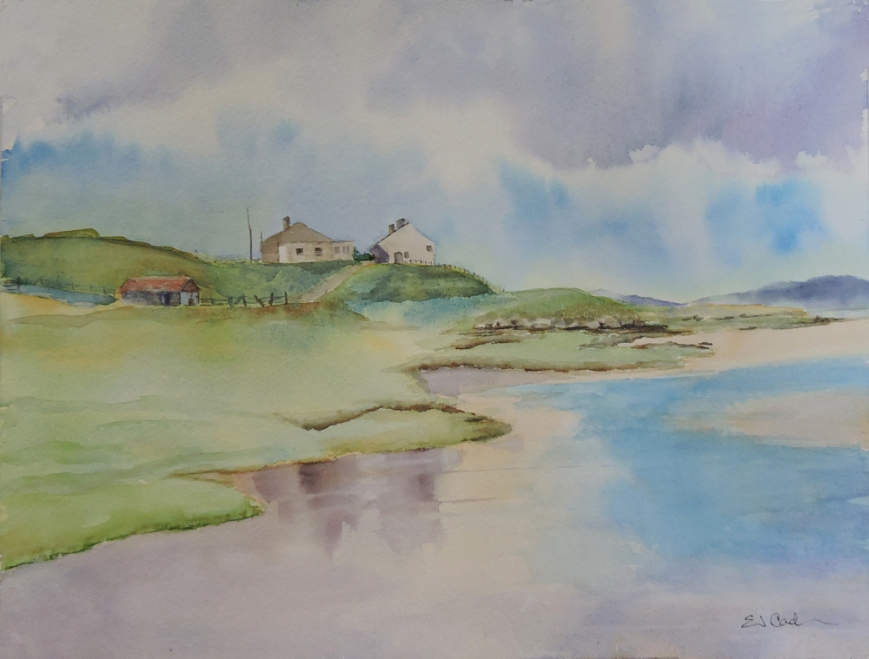 Reflections on an Ebbing Tide, painted from a photo I took on the Outer Hebrides. 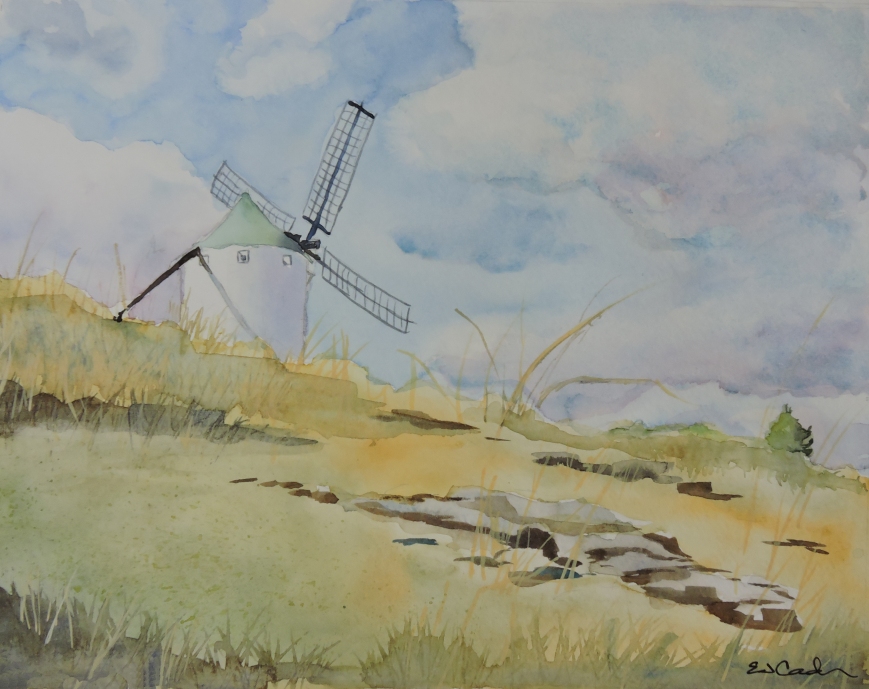 Quixotic, from a photo taken in Spain.

Tourist Boat,  from a photo in Napflio, Greece

Cloudglow, downtown Baltimore on a summer evening.  The photo unfortunately doesn’t do a good job of representing the painting–the color just won’t adjust correctly with the limited tools I have.

Taos Pueblo, from a photo I took on our New Mexico trip. 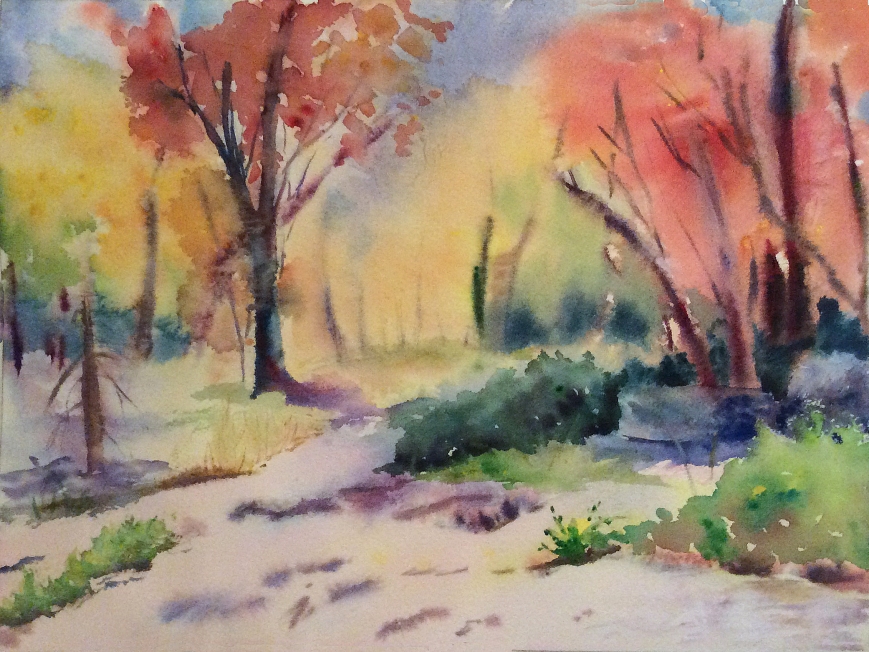 Last one, painted in Fall 2015.  I can’t think of a decent title–any suggestions?

Despite having bought a ton of watercolor paper, I haven’t done any more recently, but I have been painting a lot in other mediums.  Watch for a follow-up soon!